The market for generic drugs around the world is only going to grow. At the moment, we see varying market penetration rates across Europe and other developed markets, but due to market trends, in a decade or so, generic penetration across developed markets may well amount to around 80-90%.

“The reasons for this are plentiful, and include growing healthcare costs and market liberalisation efforts by different governments”, says Mindaugas Zagorskis, Co-founder and CEO of Pipelinepharma.

After all, generic substitution by pharmacists is authorised in 24 EU countries, and mandatory in ten of them. Meanwhile, doctors are encouraged to prescribe using the International Nonproprietary Name (INN) across 25 EU countries (and are actually required to do so in ten of those countries).

As a result, many countries in Europe have experienced success in increasing generics penetration rates. Certainly, the high volume and low value of sales push manufacturers to look for new, less saturated markets in order to increase their margins.

Looking at aggregated data, it’s easy to see that there are plenty of low-hanging fruit – blockbuster drugs whose patents are set to expire in 2022. Here are just some examples:

The main challenges for generics manufacturers

“As the entry barrier to developing a generic drug is much lower than it would be in the case of originator or biosimilar drugs, we are likely to see more small-and medium-sized manufacturers trying to seize market share,” points Mindaugas Zagorskis.

Smaller players, however, face a long list of challenges that include:

The three routes to success in the generics market

The influential KPMG Generics 2030 report outlined three strategies for generics manufacturers to stay competitive and grow despite the many challenges they face.

I. Becoming bigger and better

To counteract consolidation on the buyers’ side, manufacturers can take the alluring route of acquiring smaller competitors or merging with larger firms. In the coming years, we could see several Big Pharma players spinning off their generics units and thus opening more avenues for M&A activities. At the same time, the post-pandemic rebound in overall sales makes it a bit less likely, as seen in the case of Novartis and Sandoz, whose decoupling had been rumoured since at least 2018, but is less of a certainty given recent statements from Novartis.

Both backward (distribution) and forward (active ingredient production) integration are seen as viable strategies that give generics manufacturers more control. Having both active pharmaceutical ingredients (API) and finished dosage formulations (FDF) production capabilities is quite common and it might become even more widespread in the future. This is especially true for biotech companies.

These days it’s all about time-to-market, and any process that makes it easier is welcome. Not having to duplicate clinical trials is a major time saver, and that’s where regulations like the 505(b)(2) pathway in the United States and its EU counterpart called Hybrid Application offer a faster route.

Besides, specialty generics offer twice higher margins, and the competitor landscape is less crowded. Things, of course, might get more heated, as the segment is forecasted to grow at over 12% CAGR through 2024 and reach $88.9 billion. 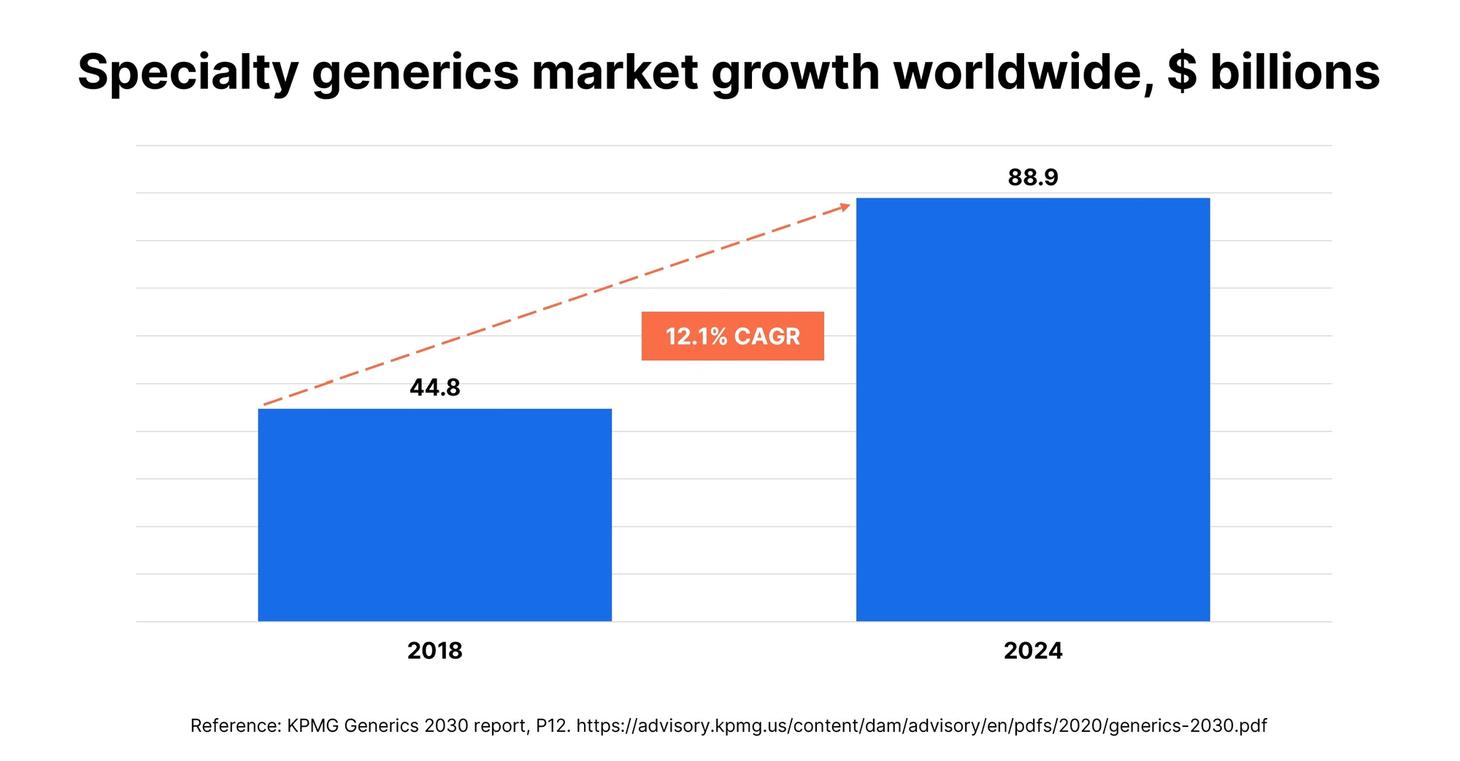 By developing differentiated drugs (usually with improvements in terms of dosage form, formulation, dosing regimen or route of administration), manufacturers have the additional benefit of fitting their product to the patient habits of a specific market.

“Understanding the preferences of certain demographics is key. For instance, introducing the first oral solution version of a drug in the UK market might help a company carve out significant market share, as oral solutions are a preferred route of administration for British consumers,” explains Mindaugas Zagorskis.

New specialty generics such as sitagliptin oral solution - a new usage form for the treatment of Type 2 diabetes - provide a more attractive liquid form to those patients who don’t like swallowing pills.

We also see some manufacturers offering different dosages of popular medicines. For example, there are only a few companies worldwide that develop EU CTDs of the popular antidepressant amitriptyline in 75 mg dosage.

Other suppliers are producing unique combinations of good old generics. Take as an example the acrivastine and pseudoephedrine hydrochloride blend – an effective alternative treatment for a number of allergies, including those of the seasonal variety.

While all of the previously listed strategies focus on the core business of developing and marketing generics, none of them really solves the issue of cross-border sales. While the COVID-19 pandemic has certainly disrupted pharma supply chains, recovery is on its way, with most countries (except parts of China) having lifted restrictions on the travel of goods and people. The latter also means we can expect the welcome return of B2B events, conferences and trade shows.

However, as the two years of en masse digitization have shown, conducting business, establishing new partnerships and signing deals purely online can prove to be more efficient. And while nothing will establish trust better than a site visit, generics manufacturers need to hone their skills of finding prospective buyers online (before their competitors).

“At Pipelinepharma, we want to level the playing field for generics manufacturers from across the globe and match them with new buyers. We believe that by facilitating new business ties we can give small and mid-sized companies the competitive edge they need,” says Mindaugas Zagorskis.